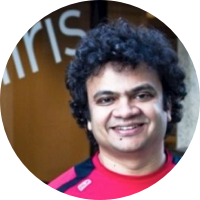 Soujanya is an entrepreneur. Prior to Healthful, Soujanya was Vice President of Global Partnerships at Yahoo. In this role, Soujanya and his team led all mobile and revenue driving partnerships with top App Developers, OEM’s and Carriers around the world. Soujanya has a history of co-founding and leading startups. Prior to Yahoo, Soujanya served as co-founder and CEO of Cooliris, which was acquired by Yahoo in November 2014. Prior to Cooliris, Soujanya co-founded Vazu and Tamarind, and was head of all-things-business at Panopticon where he led company’s integration into Kana, following a $108M acquisition. Soujanya completed his MBA from the University of Chicago and Master’s in Chemical Engineering from University of Oklahoma. He is a frequent speaker at entrepreneurship forums, suffers no jet lag, and is passionate about collaborating with great teams to contribute awesomeness to the world.